The Gremlin Fed: What’s All the Hubbub, Bub?

One of the many joys of parenting two young children is nap time. An afternoon siesta has become a cherished delight in our household, which starts by watching classic Warner Bros. Merrie Melodies cartoons. Enjoying these masterpieces is a great way to doze off.

The stock and bond markets have been anything but sleepy lately. After a dreamy 2021, markets were jolted awake with the transition into the new year. The kids and I watched Falling Hare yesterday as naptime began, and it hit me: this famed cartoon portrays what’s been driving recent market behavior.

Let me set the stage: this 1943 classic cartoon clip, which begins with the Merrie Melodies’ unmistakable big band-era jaunty tune, features Bugs Bunny, who represents investors, and a gremlin, who represents Jerome Powell, the head of the Fed (hereafter the “Gremlin Fed”).

The first scene is of a sign titled “U.S. Army Air Field” that reads: 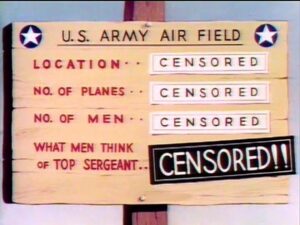 In the next scene, Bugs Bunny is sitting on top of a large Block Buster bomb, which represents capital markets, reading Victory Thru Hare Power. Yes, it seems that investors have been victorious over markets ever since the Fed launched the most recent round of quantitative easing (“QE”) in response to the Coronavirus maelstrom. After all, what’s not to like about how asset classes like the S&P 500, tech stocks, and residential real estate exploded to the upside since March of 2020? 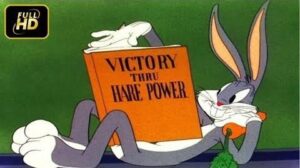 Casually laying on his back, laughing, Bugs Bunny says, “Hey, get a load of this, folks. It says here a constant menace to pilots are gremlins who wreck planes with dia-boh-liccal saa-boh-tee-gee.” He then chuckles at how absurd the idea is to him, saying, “Gremlins…oh, murrrderrr…what a fairy tale!” whereupon the gremlin enters stage right and walks past Bugs. “Little men, oh broddah!” says Bugs, laughing hysterically.

Wall Street took the same tone toward the Gremlin Fed following the post COVID Nirvana market that resulted from zero interest rates, truly unprecedented monetary and fiscal stimulus, and wild home price appreciation. Volatility seemed like a thing of the past and stocks kept notching new highs. Late night parties can’t last forever, though: the lights eventually must come on and tabs need to be closed…right?

As Bugs Bunny continues to laugh, he is jolted back to reality as the bomb on which he is sitting is hit with a mallet by the gremlin, which sends jitters through Bugs, who casually edges up to the front of the bomb and asks the gremlin, “Ehhh, what’s all the hubbub, bub?” 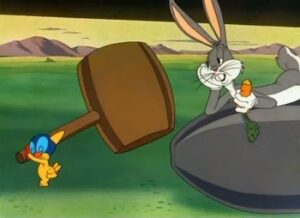 The gremlin Fed whacking away at markets.

The seemingly harmless little gremlin, representing Jerome Powell, replies, “Shhhh. These blockbuster bombs don’t go off unless you hit them juuuust right” as he continues to strike away at the bomb with the mallet. Not to be outdone, Bugs Bunny stops the gremlin, takes the mallet, and says, “Hey Mac, let me take a whack at it.” Bugs then spits on his hands, winds up twice, and swings the mallet toward the bomb with all his might. Stopping just short of contact, Bugs drops the mallet and exclaims, “What am I doing??!”

This is exactly what’s happened this year. Investors (Bugs Bunny) were resting casually on top of markets (a Blockbuster Bomb) coming off a goldilocks scenario but were jolted awake by Jerome Powell (the gremlin). Mr. Powell’s hawkish dialogue regarding monetary policy—including raising rates and decreasing the Fed’s balance sheet—sent high-multiple tech stocks tumbling and interest rates higher, which resulted in a selloff in bonds. It’s worth noting that the bomb didn’t explode: the gremlin simply caused jitters. Yes, the stock market corrected, which is not abnormal.

So where do we go from here? Well, let’s go back to the plot of Falling Hare. An angered Bugs Bunny then turns to where the gremlin was standing, points, and yells, “Why you little…you…youuu…” but the gremlin has vanished. A confounded Bugs then gasps, turns to viewers, and questions whether he just saw a gremlin, who then sneakily reappears on Bugs’ cheek. The gremlin screams into Bugs’ ear, “It ain’t Wendell Willkie!” (I’m still laughing! Few people under age 60 will get the reference). 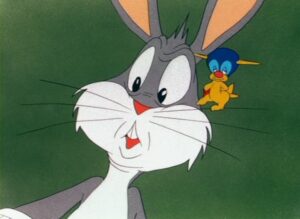 Investors get spooked by the gremlin Fed.

The gremlin then pulls Bugs’ ears down to the ground, uses an anvil to pound his paw, and bashes him over the head with a pipe wrench. The gremlin continues to antagonize Bugs, who relentlessly (and unsuccessfully) tries to seek revenge against the gremlin. Who knew that Warner Bros. would serve as a reminder that it’s usually a bad idea to fight the Fed?

Bugs and the gremlin end up on a plane where the gremlin continues to victoriously bully Bugs. The gremlin starts the propellers, and the plane takes off, symbolic of the post-COVID economy replete with inflation that we haven’t seen in 40 years. Despite Bugs’ multiple attempts at seeking vengeance, the gremlin continues to wallop Bugs who just can’t seem to keep up as the plane ascends higher. Is the Fed always a step ahead? Its track record proves otherwise.

A bit later, the plane spirals into a nosedive that leaves Bugs sick with terror. As the plane picks up speed heading straight down, Bugs changes colors and melts with crippling fear. This is often how investors feel during bouts of market volatility despite having survived them in the past. As the wings of the plane are ripped off by inertia, the gremlin casually plays with a yo-yo, symbolic of a feckless, tone-deaf Fed. With year-over-year inflation notching 7%, the Fed is undeniably behind the eight ball in raising rates. Like the Geico commercial, everybody knows that. 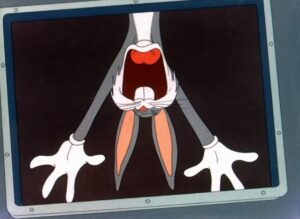 Just when Bugs reaches the nadir of sorrow and starts to scream in agony before impact, the plane sputters out of gas and rests suspended above the earth. The gremlin, sitting alongside a now calm Bugs Bunny, quips, “Sorry folks, we ran out of gas.” Sheer comedy in the face of what looked to be certain tragedy!

When Warren Foster wrote Falling Hare, the goal wasn’t for this masterpiece to serve as metaphor for monetary policy and its implications for capital market investing; but hey, if the shoe fits, wear it. The moral of the story is that the plane didn’t explode by hitting the earth and Bugs Bunny ended up being just fine – he simply had to stomach some volatility.

Speaking of stomachs, this is a great time to mention the FOMC download dinner I attended in January. Danielle DiMartino, former Federal Reserve insider and advisor to Richard Fisher at the Dallas Fed, invited me to attend the economic think tank she hosts in New York City following every Federal Open Market Committee (“FOMC”) meeting. It was an honor and a privilege to be seated among several of today’s leading economic minds who, like yours truly, have an insatiable appetite for analyzing the Fed. 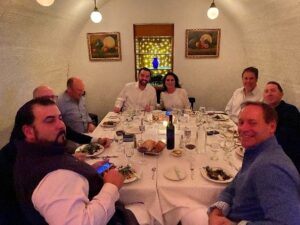 Dinner with Danielle DiMartino and other economists.

Instead of shoving complex graphs in your face, suffice it to say the yield curve, stocks, bonds, real estate, macroeconomic fundamentals, market technicals, implications of monetary policy, and the hypocrisy of the Fed were all discussed ad nauseum. It was a dinner that I wish lasted in perpetuity.

Our firm’s opinion is that much like in the cartoon, the Gremlin Fed will raise rates up until a point where inflation is tamed and then back off the hawkish tone. The market has priced in five rate hikes this year, which is interesting given that the yield curve is suggesting only two rate hikes. Either way, we are likely to see some volatility, but remember two things: 1) volatility has been abnormally muted since the COVID selloff and 2) volatility creates opportunity. Our clients already know what actions we’ve taken and those that we may implement depending on how things unfold.

Ultimately, the YDF team is here to navigate the evolving landscape so that you can enjoy time with those you care about, which hopefully includes the occasional afternoon siesta. I’m flying to New York to digest the next FOMC meeting in March and will report back with an update then.

In the meantime, here is Falling Hare for your viewing pleasure: